It's been fun putting together these Scrapbook Sunday posts. I've enjoyed flipping through my old scrapbooks and reconnecting with the Phillies of my youth. It's also provided me with a bit of perspective as to just how much I need to appreciate the Phillies of today. I kept scrapbooks for the 1984, 1985, 1986, 1990 (partial), 1991 and 1992 (partial) seasons. These were some awful, awful Phillies teams, yet I stuck with them, hanging on every win, loss, transaction, injury and hopeless post-game quote. 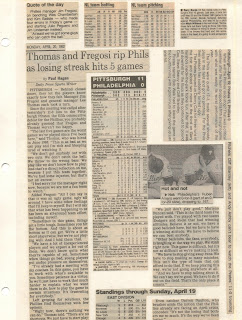 Case in point is this page from my 1992 Phillies Scrapbook. Through the first 12 games of the 1992 season, the team is already mired in last place. (My scanner opted to cut proof of this out of the actual scan.) The picture shows relievers Cliff Brantly and Andy Ashby hanging their heads in shame and embarrassment. And here are some of the choice quotes from the page:
"We just don't play good." - Mariano Duncan
"It's not the losing that bothers me so much. It's the way we've been losing." - Darren Daulton
"This is as bad as we can play and I'm sick and bleeping tired of watching it." - General Manager Lee Thomas
"Sometimes you hit the bottom. And this is about as bottom as it can get." - Manager Jim Fregosi
I tend to shy away from getting too philosophical on a blog primarily about baseball cards, but isn't this one of life's biggest lessons? In order to fully appreciate the good times, you need to have lived through and learned from the bad times. We're living in the good times now and it's made all the more enjoyable due to the horsepoop we had to put up with to get here.
Posted by Jim at 12:00 PM

I couldn't agree with you more.