Marlins 5, Phillies 1
Game 11 - Saturday Night, April 17th in Philadelphia
Let's get the unpleasantness out of the way first. On a cold night in South Philly, Jamie Moyer allowed 5 first inning runs, including a 3-run home run to the Marlins' Ronny Paulino. Marlins' starting pitcher Ricky Nolasco dominated the Phillies line-up, not allowing a hit until the 4th inning and not allowing a run until Jayson Werth's solo home run with 2 outs in the 9th.
And now for the pleasant stuff. For the first time ever, Doug and I attended a game as a duo - our first father-son baseball game. Doug received a Ryan Howard NLCS MVP Baseball and Collectible Tin, which was the game day giveaway to kids 14-years-old and younger. We 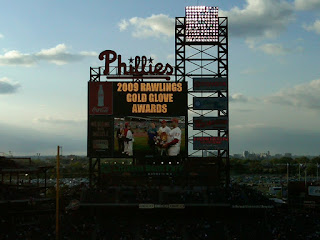 walked around Ashburn Alley together, deciding on slices of pizza for dinner. We watched the pre-game festivities from our seats while enjoying a soft pretzel, and Doug was thrilled when the Phillie Phanatic made his first appearance on the field on his 4-wheeler.
We cheered as Chase Utley received his 2009 Silver Slugger, and as Placido Polanco, Shane Victorino and Jimmy Rollins received their 2009 Gold Gloves. We stood for the National Anthem together. We watched Jamie Moyer implode, and I taught Doug not to boo. Finally, before retreating to the warmth of my car, we visited one of the many souvenir kiosks spread throughout the ballpark. Doug decided on a pair of Phillies wristbands, which he couldn't wait to show to his Mom.
The Phils dropped a game tonight, but Doug and I attended our first of many father-son games and he now has the wristbands to prove it.
Posted by Jim at 10:14 PM

Email ThisBlogThis!Share to TwitterShare to FacebookShare to Pinterest
Labels: 2010, Phanatic

Doug has an awesome Dad! He is already looking forward to his next trip with Daddy.