Phillies 14, Nationals 7
Game 8 - Wednesday Night, April 14th in Philadelphia
It was National League Champions t-shirt night at Citizens Bank Park, and I was fortunate enough to attend the game and collect my shirt. I also got to witness the unstoppable, awesome force that is the Phillies. I know they've only played the Nationals and the Astros, probably two of the worst teams in the league, but sweet Johnny Wockenfuss' beard, these guys look good.
The Good: Leading off due to Jimmy Rollins' injury, Shane Victorino had a career-high 5-RBI 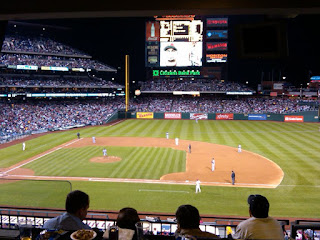 night, capped by a 2-run home run in the 5th, breaking a 7-all tie. Placido Polanco continued his torrid streak with 2 more hits and he's now hitting .486. Ryan Howard had another multi-hit game, knocking in his 12th and 13th runs of 2010. The bullpen allowed only one run in their 7 1/3 innings of work. Long-man Nelson Figueroa earned the win, pitching 3 1/3 innings of effective relief and collecting 2 hits in the process.
The Bad: Starting pitcher Kyle Kendrick didn't survive past the 2nd inning, allowing 6 runs on 6 hits. His ERA is now 17.47, and his Spring Training confidence seems to have completely disappeared. Juan Castro looked shaky during a few plays at short, which I'll chalk up to him just being rusty.
The Utley: Chase had two home runs and knocked in 4 runs. And that's very good.
Posted by Jim at 11:35 PM

Email ThisBlogThis!Share to TwitterShare to FacebookShare to Pinterest
Labels: 1961, 2010, Victorino

I'm so jealous. I only get to go to one-two Phillies games per year living in Northern California.

I moved out of the area for a while back in the late '90s. One of the myriad of reasons I moved back was because I missed going to Phillies games.