On Wednesday afternoon, Blue Jays pitcher Kyle Drabek faced Cole Hamels in a Spring Training game in Dunedin. Drabek was the formerly "untouchable" prospect shipped to Toronto in the deal that brought Roy Halladay to town and resulted in Cliff Lee heading to Seattle. Wearing #4, Drabek pitched two shutout innings against his former club, allowing just a hit and walk. Five of his outs came from ground-outs. 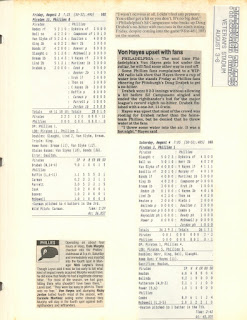 Drabek, of course, is the son of former big leaguer and 1990 Cy Young award winner Doug Drabek. Doug Drabek never pitched a no-hitter during his career, but he came extremely close back in August of 1990. He was one out away from a no-hitter against the Phillies when Sil Campusano broke it up with a single. Campusano had entered the game in the 6th inning, when manager Nick Leyva opted to rest Lenny Dykstra given the Pirates sizable 11-0 lead.

Murphy Arrives: Hours before Sil Campusano's heroics, the Phillies traded Jeff Parrett and two players to be named later to the Braves for outfielder Dale Murphy and a player to be named later. Wearing his familiar #3, Murphy made his Phillies debut the very next night against the Pirates. I distinctly remember hearing the news of the Murphy acquisition while sitting on the front porch of my Nana's beach house in Sea Isle. There was only one TV in the house, so I listened to most of the Phillies games that summer over the radio. I have vivid memories of walking to Wawa on the Sunday morning after his debut in order to buy a Philadelphia Inquirer to see the first images of Murphy in a Phillies uniform.
Named Later: The Phillies received pitcher Tommy Greene from the Braves almost a week after Murphy made his Phillies' debut. The Phils sent outfielder Jim Vatcher and infielder Victor Rosario to the Braves to complete the deal. I'm going to go ahead and call this one for the Phillies.
Posted by Jim at 12:00 PM

It is hard to believe Murphy was a Phillie