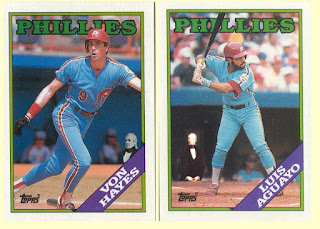 
Once again, Topps has decided to include super-rare base set variations within packs of its flagship brand. Apparently, included within packs of 2010 Topps are variations of certain Cubs cards featuring our 16th President, Abraham Lincoln, lurking in the background. Seriously. (Go ahead and do a quick eBay search for "2010 Topps Lincoln" to see what I mean.) I believe Topps first started this practice when it inserted our 11th President, James K. Polk, into select Phillies cards throughout its 1988 Topps set. Through the years, I've been lucky enough to obtain a few of these variations, although the Todd Frohwirth and Rick Schu James K. Polk variation cards have continued to elude my grasp.


The Lincoln variation cards have angered quite a few set collectors as they reason they won't be able to have a complete "set" of 2010 Topps until these difficult to find cards are tracked down. I share the frustration of the master set builders out there, who hope to collect one of every base card, insert and variation from a given set. But for the pure base set collectors, I really don't see these Lincoln variation cards as an issue. At some point, I'll add a 2010 Topps set to my collection, probably as a birthday present in the fall. I won't consider the set to be incomplete because it's lacking these variations.


My initial reaction upon reading upon these Lincoln variations was, "Why?" After thinking about it for a few days, I still don't know why someone at Topps decided to do this, other than to have a little fun. (And of course attempt to drive up product sales.) At it's core though, baseball cards and baseball card collecting are supposed to be fun. So that's how I'm viewing these variations - not as the ruination of a sacred base set of baseball cards, but as a fun variation that won't affect me in the least as a collector.


My viewpoint could change if Topps decides to have Millard Fillmore make a cameo on a 2011 Chase Utley card.
Posted by Jim at 9:52 AM

I remember those, thinking 'who's that old guy in the dugout?' Then, I'm like, 'oh, that's 11th President James K. Polk.' If there was ever a guy who could ruin clubhouse chemistry, it was that guy.

Polk was indeed clubhouse poison and had several well-documented run-ins with then manager Lee Elia. Some still think it was Polk's influence that brought his good friend Nick Leyva into the fold.

SICK NAPOLEON OF THE STUMP MOJOZ!