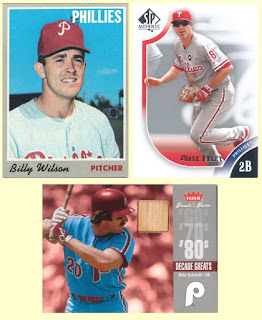 1970 Topps #28 Billy Wilson
2006 Fleer Greats of the Game Decade Greats Game-Used #DEC-MS Mike Schmidt
2009 SP Authentic #26 Chase Utley
One of the wonderful side effects of collecting baseball cards and maintaining this blog is occasionally receiving word that someone out there is looking to give away free cards. Recently, David from Tribecards decided to give away the bulk of his non-Indians collection to focus on his one true love - Indians baseball cards. I threw my name into the ring, and David was gracious enough to oblige with a wonderful box of Phillies cards.
It's funny how these things work out too. I had e-mailed David back in the middle of January when he announced his "last great Tribecards giveaway." I had kinda sorta forgotten about the giveaway, even after David sent me an e-mail a few weeks later saying he was working on my Phillies box. And just when I could definitely use a good box of random Phillies cards in the mail to put a smile on my face - David's package arrived. Good vibes all around.
The box contained an assortment of Phillies cards throughout the years, across all brands, and I've featured a few of my favorites here. Thanks again David, and best of luck to your Indians this year - except of course for the three games from June 22nd through June 24th.
Posted by Jim at 10:01 PM

Email ThisBlogThis!Share to TwitterShare to FacebookShare to Pinterest
Labels: 1970, 2006, 2009, Schmidt, Utley, Wilson B.

When I saw your post pop up on my sidebar with a picture of Billy Wilson, and the words "tribe" and "giveaway", I thought this was going to be a post about the time the Indians gave away Del Unser to the Phillies for Billy Wilson. (On further review, it was for 2 other stiffs (Oscar Gamble & Roger Freed), not Billy Wilson. Ha!

Heh-heh, of course not *those* games! Glad you found some in there to keep for your own! :-)