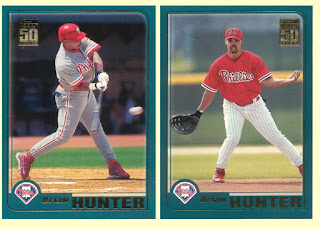 2001 Topps #13 Brian R. Hunter
2001 Topps Traded #T50 Brian R. Hunter
I've moved on to my 2001 Phillies binder, in an effort to catalogue and count the Phillies cards from the '00s in my collection. I'll follow-up with tallies and other fascinating thoughts in a bit, but for now I'm stuck pondering the strange case of Brian Hunter.
Which Brian Hunter you may ask? Why, both of them of course.
In April 2000, the Phillies signed part-time first baseman/corner outfielder Brian R. Hunter. Brian R. had bounced around the Majors for the previous eight seasons, spending most of his time as a member of the Braves. He played in 85 games with the 2000 Phils, compiling a .210 batting average mostly as a right-handed bat off the bench, but occasionally spelling Pat Burrell at first. He came back to the team in the spring of 2001, only to be released towards the tail-end of Spring Training.
Had he made the team, he would have joined Brian L. Hunter on the Phillies' 2001 roster. Known mainly for his speed, Brian L. was signed in January 2001. He played in 83 games with the Phils, hitting .276 as a pinch-hitter and back-up outfielder. He was the team's primary pinch-runner, stealing 14 bases.
Brian R. Hunter was featured with the Phillies on card #13 in the 2001 Topps set, and Brian L. Hunter also appeared in the set on card #199 as a member of the Reds. When the 2001 Topps Traded set rolled around, I was confused to find a second card of Brian R. Hunter, still with the Phillies. Turning the card over, I realized Topps had made the mistake of using a photo of Brian R., instead of a photo of Brian L. The stats on the back of this Brian Hunter Topps Traded card are clearly those of Brian L., but the pictures, both front and back, feature a smiling Brian R.
On a related note, I always wondered what the Phillies would have done had both Brian Hunters made the 2001 squad. Would they have worn "B.R. Hunter" and "B.L. Hunter" on the backs of their jerseys? It boggles the mind.
Posted by Jim at 10:24 PM

Cool notes on the Hunters. Incorporated them into my own blog post today on Brian R. Hunter.

Thanks Steve. I'm looking forward to reading more of your blog. It's nice to see Brian R. Hunter get recognized twice in the same week!