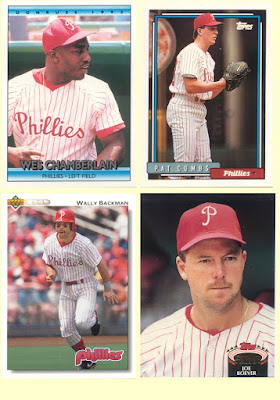 
Turn back the clock games are fairly commonplace now, but that wasn't always the case. In June 1991, the Phillies tried the promotion for the first time, wearing retro uniforms from 1957. It was very, very strange to watch the Phils play a game in something other than their familiar maroon and white uniforms. So strange in fact, I distinctly remember videotaping this game for posterity. (The Phillies announcers did the pre-game opening in vintage '50s gear and the first few minutes of the broadcast was in black and white. I recall Andy Musser looked particularly out of place.) 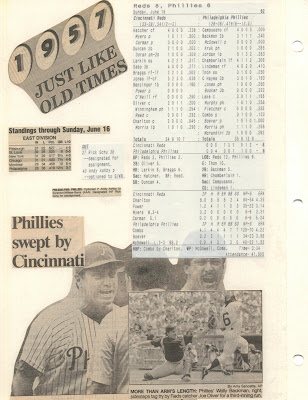 The retro uniforms didn't help the Phils against the World Champion Reds in this game, as the team lost for the seventh time in eight games. Pat Combs was hammered, Dickie Thon made a crucial error in the 9th inning and Wes Chamberlain's first home run of the year was wasted.


Retro Cards: Pictures of the Phillies wearing these uniforms turned up on several baseball cards in late 1991 and throughout 1992, as follows:


Dale Murphy shows up wearing a retro uniform on his 1991 Studio card (#220), but I didn't count that here as it's a staged studio shot. Pitchers Tommy Greene, Wally Ritchie and Mitch Williams show up on cards wearing their retro uniforms, even though they didn't pitch in the game.
Posted by Jim at 12:00 PM

What ever happened to Pat Combs?