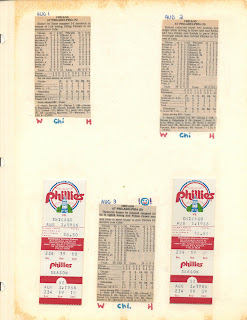 
My Dad and I attended the Phillies game on August 3, 1986, most likely so I could watch Bob Dernier play for the visiting Cubs. We sat in Section 234, behind the visitors' dugout on the 3rd base side. I truly got the best of both worlds out of this game as Dernier collected three hits, but Mike Schmidt won the game with a 3-run home run in the 8th inning.


I love the symbol I used to indicate my presence at the game - a colorful smiley face surrounded by two purple exclamation marks!


By this time, I was subscribing to The Sporting News, and their far superior box scores appear in my scrap book rather than the box scores from the Atlantic City Press.
Posted by Jim at 12:00 PM

Ha! these boxscores (with Stone, Schu, Russell, and Jeltz) reminds me of something I read in the Philadelphia Inquirer back at that time. Someone was interviewing Bill Giles on the "state of the team", and Giles boasted how he and his cronies sat around over drinks one night and scribbled the lineup for the "team of the decade" down on a cocktail napkin, which included those 4 stiffs!

(Wow, the security password for this post was "shlousi", which is also a contraction describing the Phillies team in those days (what a coincidence)!

These Phillies teams were definitely shlousi!