April 20, 1985: The Phillies acquired one of my all-time favorite players, Kent Tekulve. After years of seeing him wear the yellow and black of the Pirates, Kent Tekulve was now going to wear the white and maroon of the Phils. My scrapbook indicates this trade took place on April 21st, but Tek made his Phillies debut that day so the April 20th date (per Baseball Reference) is probably a little more accurate. 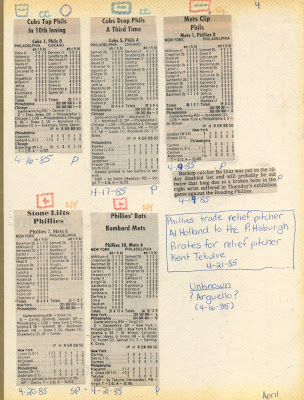 X's and O's: Looking back, my game symbols were a little confusing. A blue box indicated a road game while a red box indicated a home game. Within the boxes, a blue minus represented a loss while a red plus sign marked a win. The purple circle represents an extra-inning game. (Not sure why I felt the need to track those separately.)


Arguello Mystery Solved: The mystery player in the April 16th boxscore is actually Luis Aguayo. The 1985 box score editor for the Atlantic City Press has no idea how much angst he caused me when he or she misspelled Aguayo's name. I searched all year for any mention, news or biography of this Arguello fellow, to no avail.


Bobby D.: My personal favorite player, Bob Dernier, did well in the two Cubs boxscores pictured, going 3 for 9. Larry Bowa contributed two doubles in the Cubs extra inning win over the Phils on April 16th, and he also scored the walk-off winning run.
Posted by Jim at 12:00 PM

Former Phillie, Keith Moreland went 4 for 6 in the two Cubs games with 4 RBI's. As a Cubs broadcasting fill in last year I thought Keith did an outstanding job. Love to see him back in Chicago.

It's still amazing to me how many ex-Phillies ended up on those Cubs teams of the early '80s. Having Dallas Green as their GM is similar to what's happening now with Ed Wade as the Astros' GM.

I always wonder when a resource, like Total Baseball, recalculates stats by looking at old box scores. They'll look at all the box scores from 100 years ago, and realize Ty Cobb has two fewer hits, or whatever. As your scrapbook shows, even recent box scores are filled with errors. How good could the ones from 100 years ago, befroe anyone really cared, be? TB would probably correct the error in the official books, add a new player to the roster, and give him one game played.

At some point during the 1984 season, I remember making a list of all the Phillies players based on these box scores. The elusive (and non-existent) Mr. Arguello appeared on the list.

Your point is a valid one . . . If a box score from 1984 can produce a non-existent player, what or who is to say the boxscores from 100 years ago are completely reliable?