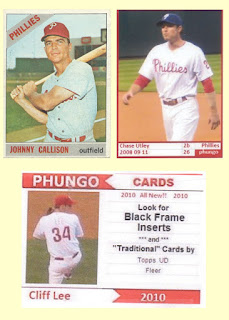 1966 Topps #230 Johnny Callison
2010 Phungo #26 Chase Utley
The 2010 baseball cards have arrived! We're a week away from the estimated release date of 2010 Topps, but the first pack of 2010 Phungo Cards arrived in my mail box over the weekend. The pack's wrapper features the newest Seattle Mariner, Cliff Lee. Inside my pack of Phungo cards, I found several cards from this year's 52-card base set, including the Chase Utley card featured here. I also was lucky enough to pull a Harry Kalas In Memoriam card and a Black Frame Insert card commemorating The Spectrum.
Finally, to my surprise I received three "traditional" Phillies cards from past Topps sets, all of which were cards from my wantlists. Along with the great looking Johnny Callison card featured here, I received the 1970 Topps card of Curt Flood and the Phillies card from the red-bordered 1974 Topps Checklist set.
Thanks Phungo for the great cards and thanks for kicking off the 2010 baseball card season!
Posted by Jim at 7:00 PM

Glad they all made it their safely - Enjoy - less than a month till Pitchers and Catchers!

Thanks again Paul. I've opened 15 packs of 2010 Topps now, but this is still the best pack of the year.