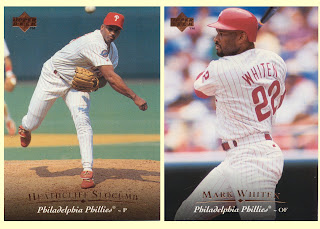 Just when I was starting to think 1995 Upper Deck Update cards did not actually exist, I received all four Phillies cards from the set from GCRL, aka Jim, aka the O-Pee-Chee guy. (In addition to the cards featured, Tyler Green and Gregg Jefferies appear in the set.) Similar to the Kevin Stocker insert card I recently featured, the cards themselves aren't all that thrilling. What is thrilling to me about these cards is that I've had them on a wantlist for 15 years . . . and now I can officially cross them off.
1995 was somewhat of a black hole year as far as baseball and baseball card collecting were concerned. The 1994 players' strike was still fresh in my mind, and I lived in North Carolina year-round. Both these factors contributed to a dearth of 1995 Phillies cards in my collection, since the Tar Heel state isn't exactly a hotbed for the Phillies or Phillies baseball cards. In fact, it's safe to say I watched less Phillies baseball in 1995 than any other year I've followed the team.
The 1995 Phillies were a forgettable bunch, finishing 21 games behind the Atlanta Braves in the NL East. Whiten, Jefferies and Charlie Hayes tied for the team lead in home runs with 11 a piece, and Paul Quantrill led the pitching staff with 11 victories. In retrospect, it appears as if I really wasn't missing much.
Posted by Jim at 12:00 PM