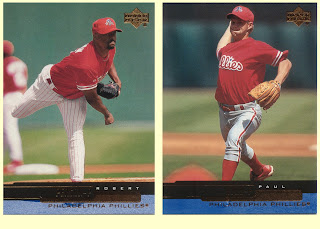 I recently received a package from the proprietor of Section 36, one of the best places to visit if you're a Sox fan, a baseball fan, or if you just generally despise the Yankees. Section 36 was cleaning out his 2000 baseball cards to make room for the 2010s, and he was kind enough to send along an assortment of Phillies cards from the beginning of the decade.

Looking through the cards reminded me just how far the Phils have come since the lean Terry Francona years. In 2000, Tito was in his final year of service with the club, piloting them to a last-place finish with a 65-97 record. He ran out a woeful line-up littered with the likes of Desi Relaford and Ron Gant and Alex Arias. Bobby Abreu, Scott Rolen and Doug Glanville provided a few highlights here and there, but the team just wasn't very good. Featured here are two guys who, in my mind, epitomize the Phillies' struggles of the early 2000s. Both Robert Person and Paul Byrd at some point early this decade served as the team's "ace." We've come a long way.
Posted by Jim at 4:00 PM

But Robert Person had 7 RbIs in one game...I think.

Thanks for the kind words. Glad you liked the cards.

I do a similar thing looking back ten years at the Sox. How did they ever expect to win with some of the stiffs they tried to put around Nomar and Pedro. How they ever made the playoffs is beyond me. Reason number 136 why Pedro should have been MVP in '99.