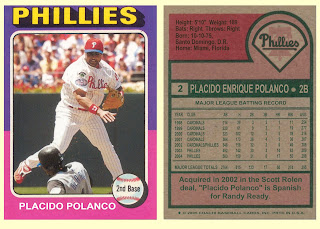 With the additions this week of catcher Brian Schneider, infielder Juan Castro and old friend Placido Polanco, the 2010 Phillies are starting to come together. The way I see it, the team's biggest needs at this point are bullpen help and a 5th starter.

The Phils brought Polanco back today (3 years, $18 million) to play 3rd base - the position he played briefly for the team following his acquisition from the Cardinals in the July 2002 Scott Rolen deal. Placido was the odd man out in 2005, blocked at 2nd by Chase Utley and at 3rd by David Bell. In June 2005, he was dealt to the Tigers where's he's played successfully for the past 3½ years. During his time in Detroit, Placido's been an All-Star (2007), won two Gold Gloves at 2nd base (2007 and 2009) and played in a World Series. (Although I'm guessing Placido would prefer to forget his first World Series appearance - he went 0 for 17 as the Cardinals easily defeated his Tigers in 2006.)

Is he an upgrade over Pedro Feliz? Only time will tell, but I love his quote from today's press conference: "I always wanted to be here. I never wanted to leave." Welcome back Placido!
Posted by Jim at 9:24 PM

Very disappointed here in Motown over the loss of Polanco. Son and I met him the day he was named to the AS team in 2007 and he was exceptionally friendly and gratious.

He will be missed here in Detroit.