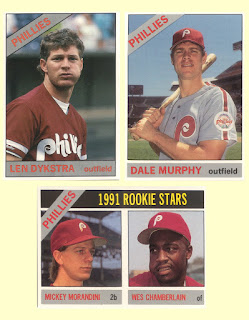 Meanwhile, back in the pre-Roy Halladay era . . .

In 1991, for the third year in a row, Baseball Cards Magazine produced a 72-card set inserted six to a panel within each issue. The cards used the style of the 1966 Topps set and featured three Phillies cards - Lenny Dykstra, Dale Murphy and a combo rookies card of Mickey Morandini and Wes Chamberlain.

The Dale Murphy card works particularly well as the popular slugger's away jersey matches up nicely with the card's design. The back of this card notes, "It's still tough to see a picture - not to mention a baseball card - of Dale Murphy wearing a Philadelphia uniform." The Lenny Dykstra card pictures the Phillies center fielder with his ubiquitous chaw, looking slightly befuddled. A few years later, Dykstra, Chamberlain and Morandini would play key roles for the Phils as they won the 1993 National League Championship.

I had to rearrange my 1989, 1990 and 1991 Phillies binders in order to accommodate these new additions. I arrange my Phillies cards alphabetically by set within each years' binder, so these cards pushed the Bowman cards down a few slots. It's nice to finally have these cards where they belong and not stuck in a box on a shelf.
Posted by Jim at 8:00 PM