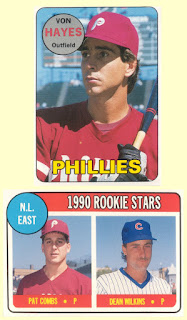 Following the pattern established the previous year, Baseball Cards Magazine again included six repli-cards within each issue throughout 1990. For this 72-card set, the magazine used the 1969 Topps design. Only two Phillies made it into the set - outfielder Von Hayes and rookie pitcher Pat Combs.
The back of Von Hayes' card makes mention of the "famous" five-for-one trade which brought him to Philly. It also points out Von is "one of the game's best-kept secrets." I was never a huge Von Hayes fan, but I think this is an awesome card. The 1969 Topps design works well here even though it's obscuring the brim of Von's hat. The Wrigley Field score board in the background is an added bonus.
Injuries would curtail Pat Combs' career and he never quite regained the success he found in 1989 when he jumped from A ball all the way to the Majors. Combs went 4-0 with a 2.09 ERA in his six starts with the Phils in 1989. (Dean Wilkins pitched in 25 games with the Cubs from 1989 to 1991, finishing with a 7.55 career ERA.)
Posted by Jim at 8:00 PM