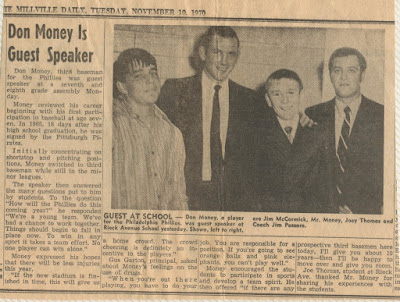 I recently came across the newspaper clipping above while looking through an old photo album and I thought I'd share. The article is now 39 years old and my Dad is pictured at the far right. (Please click to enlarge.)

My favorite quotes from local hero Don Money include his prediction for the Phillies upcoming 1971 season: "We're a young team . . . Things should begin to fall in place now." Money also expressed excitement over the new Veterans Stadium, "if the new stadium is finished in time." (It was.)
Unfortunately, Don and the Phils struggled in 1971. Don played in 121 games for the team, hitting .223 with just 7 home runs. He lost his starting third baseman job to John Vukovich, who hit a woeful .166. The Phillies finished in last place, 30 games behind the first place Pirates.
Posted by Jim at 11:37 PM

Email ThisBlogThis!Share to TwitterShare to FacebookShare to Pinterest
Labels: 1971, Money

Coach is on the right...his remarks were particlarly memorable