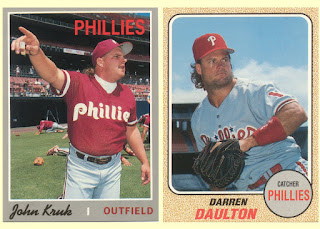 1992 Baseball Cards Magazine Repli-Cards #40 John Kruk
1993 Baseball Cards Magazine Repli-Cards #8 Darren Daulton
I recently completed the enjoyable task of updating my checklists and putting away the great Phillies cards received via a trade with Rhubarb_Runner. I've previously featured the Baseball Talk Robin Roberts card he sent my way.
Along with a few other oddball Phillies cards were three "repli-cards" masterfully trimmed from cardboard inserts stapled within past issues of Baseball Cards Magazine. From 1984 until 1993, Baseball Cards Magazine included these cards on cardboard panels in the center of each issue. The cards I received represent the first cards from this collection to make it into my Phillies' baseball card binders.
But here's the thing . . . I have all these cards. Stored chronologically in white magazine boxes in the corner of my basement is pretty much the full run of Baseball Cards Magazine since its inception in 1984. (I loved the early years of this magazine, but that's a post for another day.) So here's my quagmire - do I cut the Phillies repli-cards from their homes within the magazine to display within my Phillies baseball card binders? Or do I leave them as is, preserved as nature intended, but rarely viewed and enjoyed?
Posted by Jim at 2:49 PM

I remember getting 2 issues' worth of these cards back in the early 1990s. I think they were all in the 1968 style.

I used to love those cards. Sounds like you should just buy another set to put into your binders!

I say cut them out. If they're rarely viewed and enjoyed as they are, they're not doing you any good. I doubt you're destroying any value in the complete magazine. So, unless you're flipping through the stack on a regualar basis, get the cards out where you can see them.

I'm definitely leaning towards cutting them out. I don't think I've been through those old magazines for at least 10 years or so.

Oh, definitely cut them. After ten years, you need to enjoy the cards more. Frankly, might be time to be rid of the stack of magazines themselves if you haven't looked at them in ten years. Unless, I guess, you have a really big basement.

Agreed. They're coming out. This will be a fun little holiday project.

I finally just linked through from your recent post about the 1968 Topps cards. There were more than just three Phillies replicards in the series. If you want a complete list -- by my count, I see a total of 9 from 1989-1993 -- I can supply it to you. Shoot me an email at mattapp at the Google email service.