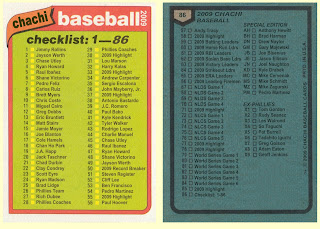 In my opinion, all good baseball card sets need a checklist and that checklist should be part of the set. As a set collector growing up, I never minded whenever I'd get a checklist in a pack of cards. It was the roadmap. It was a necessary tool. Without the checklists, I'd have no idea who I needed to complete a set, let alone how many cards comprised the complete set.

The 2009 Chachi set marks the fifth year I've put together a complete team set chronicling the year that was for the Phillies. This set marks the first year I haven't created backs for each card in the set. Creating the backs was an extremely time-consuming endeavor, and the maintenance of this blog took precedence this past season. (The blog is more fun than creating the card backs for every card.) However, I needed a back for the checklist card in order to capture the complete 86-card checklist. There are some "insert" cards listed as well, some of which found their way on to the blog over the past year.
The number of cards in a complete Chachi set varies from year to year, depending on the number of Phillies players, highlights and Postseason appearances. The inaugural 2005 set contained 63 cards, followed by 71 cards in 2006, 73 cards in 2007 and 87 cards in 2008. There's no way to tell how many cards will be included in the 2010 Chachi set, but card #1, featuring the 1974 Topps design, will debut on Opening Day 2010.
Posted by Jim at 12:00 PM

Personally, I can't believe you ever tried to do a back. With the Topps designs you pick and their complete career stats, it must have been murder.

The Chachi cards are quite enjoyable. The '74 design is a good choice for next year's set.

Off topic - The Mets have signed Chris Coste.

Monday's are bad enough now this.

I may need to post a few older Chachi cards with their backs. Once the template was created, it wasn't so bad. It just took a long time.

Chris Coste a Met? Say it ain't so Chris!