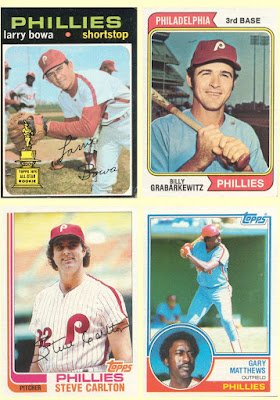 2010: A Chachi Odyssey, Conclusion
In which a poll appears

So there you have it. The 2010 Chachi Set Planning Committee narrowed the choices for next year's Chachi set down to the 1971, 1974 and 1983 Topps sets. (The 1982 Topps set is also in the final four, but the chairperson of the committee has realized the error of his ways.) We think we've picked our favorite, but we're interested in the input from the readers of this blog. Therefore, I've added a poll (look left) which will remain open until the end of the World Series. I must stress however, the poll's outcome will not be the deciding factor in choosing the final 2010 Chachi set design. It will be a big factor, but not the deciding factor.

I'd also appreciate reader's comments as to why they chose a certain set over another set. Why did you vote the way you did? Do you have any special memories of collecting these sets? Is anyone as upset as Doug is about 1982 Topps beating out 1987 Topps? The Committee thanks you in advance for your comments and feedback.
Posted by Jim at 2:00 PM

1974 is the first set I ever collected. It has sentimental value for me.

The Super Veterans option for the 1983 set won my vote. It was a tough one between that and 1974.


If you settle on 1974, don't forget to include some "traded" cards where half the card is covered by a big yellow area!

I vote 1983. I also have some cards from your wantlists. Interested in trading
Bob