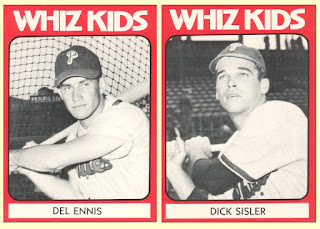 1980 TCMA Whiz Kids #17 Del Ennis
1980 TCMA Whiz Kids #6 Dick Sisler
I recently acquired the 31-card 1980 TCMA Whiz Kids set - a set I've been searching for ever since I saw it for the first time in a Cooperstown gift shop back in the late '80s. Souvenir funds were tight, and I opted for a few more Hall of Fame plaque postcards rather than shell out the $10 for the set back then. It's been on my wantlist ever since, and the set recently appeared on eBay for a reasonable price. Quest completed.
All the greats from the 1950 NL Champs are in the set, including Richie Ashburn, Robin Roberts, Del Ennis, Dick Sisler, Curt Simmons and Jim Konstanty. The set features every player to don a Phillies uniform in 1950, with the exception of Steve Ridzik, Jack Brittin, Paul Stuffel, Johnny Blatnik and Milo Candini. Ridzik, Brittin, Stuffel and Blatnik each appeared in four games or less for the team, but I'm surprised at the omission of Candini, who appeared in 18 games as a relief pitcher.
The set also features the team's manager, Eddie Sawyer, and his coaches - Benny Bengough, Dusty Cooke and Cy Perkins.
Posted by Jim at 12:00 PM

Does anyone remember those "Baseball Advertiser" catalogs that TCMA used to send out in the late 70s? A lot of these team sets were on there for just a few bucks each. I really like the historically themed sets--too bad I didn't pick up a few.

Was that gift shop in the parking lot to Doubleday Field? I spent way too much money there in the 1992-96 (pre-married) period. LOL!

Matt - I remember those catalogs very well! Same with the Fritsch Cards ads on the back of the baseball card papers/magazines.

And yes DF, it was the gift shop in the parking lot of Doublebay Field. What a wonderful place! It may have been harder for me to leave that place than it was to leave the museum!

Congrats to the Phillies for returning to defend! Heads up that I referenced your Whiz Kids set posting from today's #5 type collection entry.