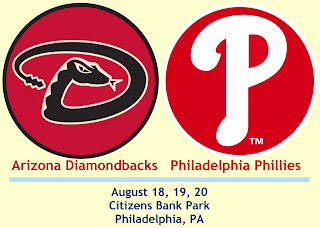 Records: Diamondbacks 54-65, 4th Place in NL West (16 games behind the Dodgers); Phillies 66-49, 1st Place in NL East (4½ games ahead of the Marlins)
Played with the Diamondbacks and the Phillies: Per Baseball Reference.com, 27 players have played for both the Diamondbacks and the Phillies, including - Ricky Bottalico, Omar Daal, Travis Lee, Eddie Oropesa, Dan Plesac, Curt Schilling and Amaury Telemaco
Put 'Em Away: This begins a stretch of 10 games in which the Phils will play all sub-.500 teams. I'm hoping for nothing less than a 7-3 record over that span, although the Phils have struggled in recent years to "play up" to the second division teams.
Diamondbacks Probables: Jon Garland, Dan Haren, Doug Davis
Phillies Probables: Pedro Martinez, Cliff Lee, Joe Blanton
Posted by Jim at 12:00 PM