There was a time I wouldn't even have considered leaving a game in the midst of a rain delay. Tonight, we didn't hesitate to leave Citizens Bank Park once the rain let up slightly. I must be getting old.
Pedro Martinez made his home Phillies debut tonight, pitching 3 innings and allowing a Diamondbacks' run before the hour-long deluge. After the rain delay, Jamie Moyer made his 2009 bullpen debut - and he made it look easy. Jamie pitched 6 scoreless innings, allowing just 2 singles while striking out four. To compliment his outstanding pitching performance, Jamie went 2 for 3 at the plate.
The Phils' offense was paced by Jayson Werth (2 for 4 with a solo home run and 2 RBI) and Carlos Ruiz (3 for 3 with a solo home run). 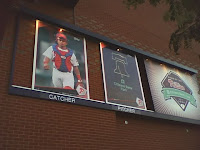 Further Reading: There was a great article in Sunday's Philadelphia Inquirer by beat writer Andy Martino breaking down Jamie Moyer's reaction to his demotion to the bullpen.
Where's Pedro?: The Phillies display each game's starting line-up by the outfield entrance to Citizens Bank Park, using giant custom made 2009 Topps Phillies cards. I was very disappointed tonight to find no Pedro Martinez card hanging in the line-up. (I would have helped with one had they asked.)
Posted by Jim at 10:56 PM

Email ThisBlogThis!Share to TwitterShare to FacebookShare to Pinterest
Labels: 2009, Moyer

Is that where you got the idea for the back of your door - or did they steal the idea from you? You could do that in the Phillies room and add track lighting in the ceiling with a little pin-light on each card. I like it!

I think they stole the idea from me. I like the idea of track lighting in the Phillies Room . . .