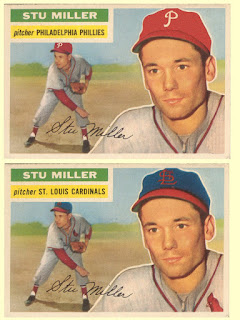 If Harvey Haddix now has a 1956 Topps Phillies card, it's only fair that Stu Miller should now have one as well.

He found some success in the early '60's with the New York Giants, making the NL All-Star team in 1961. You may have heard of or seen Stu's appearance during the 1961 All-Star Game. Pitching in a strong wind in San Francisco's Candlestick Park, Stu was blown off the mound and a balk was called.