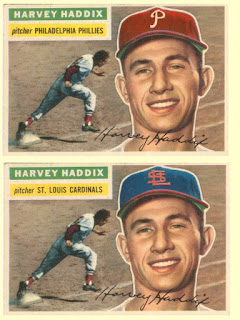 Kitten, as he was known during his playing days, is probably best known for the game he pitched on May 26, 1959, as a member of the Pittsburgh Pirates. On that day, he pitched a perfect game through 12 innings, only to lose the game in the 13th. Can you believe it?
Posted by Jim at 5:06 PM

I shook hands with Harvey at Connie Mack Stadium...I went with my Dad...Harvey was smoking...so was my Dad.