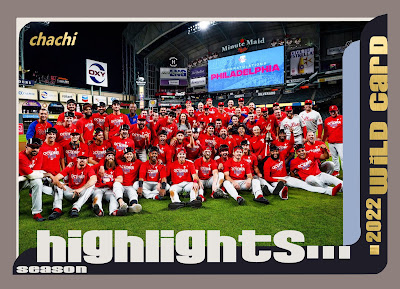 Phillies 3, Astros 0
Game 160 - Monday Night, October 3rd in Houston
Record - 87-73, 3rd Place, 13 games behind the Braves
One Sentence Summary:  Behind the fantastic pitching of Aaron Nola and two home runs from Kyle Schwarber, the Phillies defeated the Astros, 3-0 and clinched their first postseason berth since 2011.
What It Means:  The Phillies have gone through some incredibly lean years, managerial stints from Ryne Sandberg, Pete Mackanin, Gabe Kapler, Joe Girardi and now Rob Thomson, rebuilding years where watching the games on a nightly basis became a chore, and now they're back in the postseason.  The Brewers miraculously pulled out their game against the Diamondbacks, meaning it was solely in the Phillies' hands to reduce their magic number from one to zero.  Doug and I stayed up to watch the final out, the on-field celebration and the clubhouse shenanigans because the last time the Phillies were in the postseason, Doug was almost five and he has no recollection of what was an annual occurrence during his first five years.  He mentioned last night, "I've never seen this before," and I had to remind him he in fact had.  It was a great night, a happy night, and I'm excited to see how far this team can go.

What Happened:  Nola was perfect through 6 2/3 innings before Jordan Alvarez singled sharply to right, ending the perfect game and the no-hit bid.  Jose Alvarado entered shortly thereafter, pumping fastball after fastball to record the next four outs, striking out three in the process.  Zach Eflin, the second longest tenured Phillies player behind Nola, entered the ninth to attempt his first career save, and he needed just 14 pitches to end the game and end the playoff draught.
Schwarber had homered on the very first pitch of the game from Astros' starter Lance McCullers, his 45th of the year, and he'd add his 46th in the eighth inning.  In between those two shots, Bryson Stott lined a home run just over the right field wall.
After 11 years of not reaching the postseason, after all the losses (both by the Phillies and personally), all the changes, and getting through the pandemic, this win felt wonderful.

Featured Card:  I'm happy to create my first postseason clinch card in 11 years!  Just like I did back in the day, I'll create a new Chachi card for each playoff and World Series game the Phillies play.