Braves 6, Phillies 3
Game 151 - Saturday Afternoon, September 24th in Philadelphia
Record - 83-68, 3rd Place, 12 games behind the Mets
One Sentence Summary:  Kyle Wright held the Phillies hitless through five innings and notched his 20th win of the season in this 6-3 defeat.

What It Means:  The magic number remained at nine following this loss and the Brewers win in Cincinnati.

What Happened:  The Phillies line-up had only three hits, including Rhys Hoskins' double in the sixth to break up the no-hitter and Bryce Harper's two-run home run a batter later.  Phillies starter Bailey Falter was hit hard, allowing six runs on ten hits in just 3 2/3 innings.  The bullpen established some calm after Falter's exit, but there were too few clutch hits for the remainder of the game.

Featured Card:  We were there (see below) and the only pre-game autograph Doug was able to add was from former Braves and Phillies player Milt Thompson, who was hanging out in the Diamond Club.
Field Report:  Jenna, Doug, Doug's teammate Tyler and me attended this game, enjoying the fall-like weather from the Diamond Club.  Other than Harper's home run, there wasn't much to cheer about, although the crowd was the loudest I've heard it so far this season in the bottom of the seventh.  With two outs, two runners on and the score at 6-3, Hoskins lined an A.J. Minter pitch just feet to the left of the right field foul pole.  A few feet over and the score would have been tied at six.  After that let-down, Hoskins struck out to end the inning two pitches later. 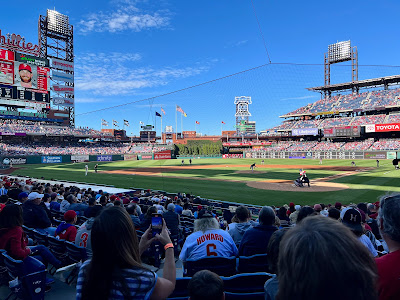 Email ThisBlogThis!Share to TwitterShare to FacebookShare to Pinterest
Labels: 1986, Thompson