One Sentence Summary:  The Phillies, in desperate need of a win, were shut out by the Orioles, the worst team in baseball.

What It Means:  Maybe I'm completely wrong here, and I hope I am, but the Phillies don't seem like a team that should be playing in the postseason.

Featured Card:  In a pregame ceremony, third baseman Bryson Stott and pitcher Jean Cabrera were honored as the organization's annual recipients of the Paul Owens Award, given to the best position player and pitcher in the team's minor league system.  Stott could be up with the Phillies as soon as next season and he's already received his fair share of baseball cards.  To date, I don't have any cards of Cabrera in my collection and the 19-year-old righty spent the season with the DSL Phillies. 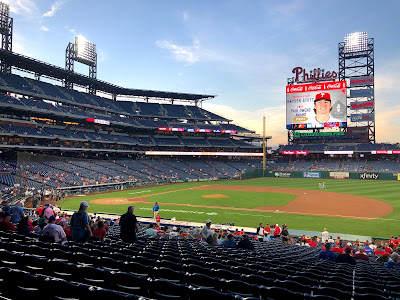 Field Report:  Jenna and I attended this game, our first game together without kids, since 2019.  While we enjoyed each other's company, the game itself was a dud.  The ballpark was mostly quiet and empty.

Transaction:  Luke Williams (inf) was activated from the Covid injured list and Mickey Moniak (of) was optioned to Lehigh Valley.  To make room for Williams on the 40-man roster, Tyler Phillips (rhp) was designated for assignment.  (Phillips would be released on Tuesday.)

Email ThisBlogThis!Share to TwitterShare to FacebookShare to Pinterest
Labels: 2021, Stott