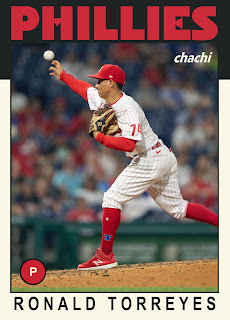 One Sentence Summary:  Vince Velasquez managed 53 pitches before getting yanked and the Phillies were demolished by the Braves, 15-3.

What It Means:  We need two, maybe three more starting pitchers if the Phillies are going to be considered serious contenders.

What Happened:  Velasquez was hit early and often, allowing six runs on five hits including two home runs.  Brandon Kintzler lowered his ERA to 6.91 but allowed both of his inherited runners to score.  Enyel De Los Santos gave up four more runs in his mop-up duties, and his ERA is now an unsightly 8.31.  How those three pitchers are still on the Phillies' pitching staff is a mystery to me.  Andre McCutchen had three hits, but the offense overall went 0 for 10 with runners in scoring position and left 11 runners on base.

Featured Card:  Ronald Torreyes is one of the best things to happen to the Phillies this season.  A surprise addition to the opening day roster, Torreyes has played himself into an everyday job, be it at shortstop or third base.  He's also made appearances at second base and center field, and in this game he made his second pitching appearance of the season.  Torreyes recorded the final five outs of the game, getting hit around a bit in the process, but truly taking one for the team.

Transaction:  The Phillies claimed Tyler Phillips (rhp) off waivers from the Texas Rangers.  Pitching for Double-A and Triple-A this season in the Rangers system, Phillips was 1-5 with a 6.75 ERA in nine starts and 10 games overall.