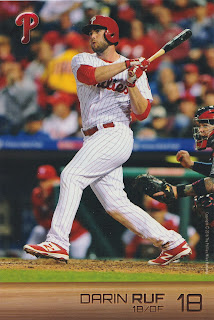 One Sentence Summary:  Connor Brogdon gave up two three-run home runs in the eighth inning as the Giants came from behind to stun the Phillies with a 10-7 loss.

What It Means:  With the suddenly depleted bullpen due to injury (Archie Bradly) and Covid protocols (Jose Alvarado), Brogdon was inexplicably left in the game after giving up his first three-run home run to Alex Dickerson, giving the Giants a 7-6 lead.  Wilmer Flores followed a few batters later with the second three-run home run and the Phillies were on their way to their second loss in a row to the Giants.

What Happened:  Everything was going relatively well with Mickey Moniak and Nick Maton making great defensive plays in the early going.  Maton collected his first RBI in the second, driving home Moniak with a double to right.  Brad Miller hit a three-run home run in the third and Alec Bohm added a two-run home run in the fifth.
Starting pitcher Zack Wheeler went 5 2/3 innings and allowed four runs on five hits while striking out six.  Jean Segura left the game with a quad injury and given Didi Gregorius' nagging elbow injury, the Phillies were forced to use Miller and then Andrew Knapp at second base to finish the game.

Featured Card:  Doug and I were there (see below) and we were both disappointed at the lukewarm
reception given to Darin Ruf when he pinch-hit in the fifth.  Ruf was with the Phillies between 2012 and 2016, and this was his first trip back to Citizens Bank Park since his final game with the Phillies on October 1, 2016. 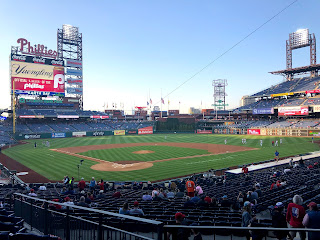 Field Report:  Fortunately, since it was a (virtual) school night, we left before the eighth inning and the highlight of the game for Doug was the heckler in Section 122 who was inexplicably dragging Matt Joyce the entire game.  What did that guy have against Joyce?  I made my first and last trip to Shake Shack this season, after a 20-minute ordeal in which I attempted and ultimately succeeded in ordering a burger without cheese.

Email ThisBlogThis!Share to TwitterShare to FacebookShare to Pinterest
Labels: 2016, Ruf