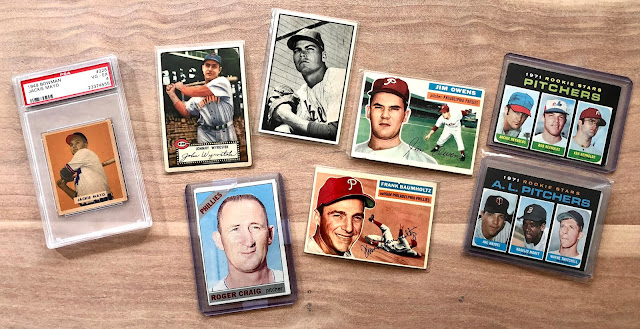 I've always prided myself in trying to live in the moment and to not spend too much time looking forward to what comes next.  With that being said, I'm more than ready to turn the page on 2020 and I'm hopeful for a safe, healthy and less anxiety-filled 2021.  I'm extremely grateful my family made it through this year with our health and clinging to a few annual traditions that mean a lot to us.  Selfishly, one of those annual traditions I look forward to is the opening of presents at my Mom's house the day after Christmas.  The gathering was in doubt this year, but with everyone masked up, spread out as much as we could and with hand sanitizers readily available, we did it.  Dr. Fauci would have been proud.  The gathering was shorter than usual, with less hugs and less eating, but it still meant a lot.  We gathered for a quick family selfie at the end of the evening, which was really the only time we all briefly came together. 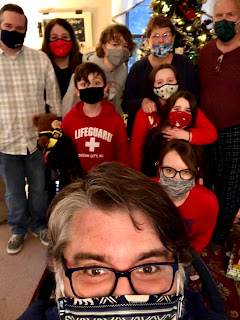 The last present I opened yesterday contained eight individually wrapped gifts in the exact shape and size of baseball cards.  If you've read this blog each December for the past 10 years, you're now familiar with the annual event of Santa Brings Way Too Many Awesome Baseball Cards to Jim.  Thanks largely to my Mom, it's actually getting harder to populate my Most Wanted - Vintage list on this blog's sidebar, and I may need to change up my tactics for 2021's installment.  From this year's haul, the 10th Annual SBWTMABCTJ:
1949 Bowman #228 Jackie Mayo - The addition of this Mayo card, since jail-breaked from its slab, means I'm only one card away from a 1949 Bowman Phillies team set.  The Richie Ashburn rookie card is going to need to wait a little bit longer.
1952 Topps #13 Johnny Wyrostek - Wyrostek is on the Reds here, but he played with the Phillies in 1952 which means he fits into my definition of belonging in my 1950s Phillies binder.  The only remaining 1952 Topps Phillies cards I need now are from the pricey high-number series.
1953 Bowman Black & White #47 Jack Lohrke - Compared to their Color counterparts, the 1953 Bowman Black & White set often gets overlooked.  For a complete run of Bowman Phillies cards, I'm down to needing three cards - the '49 Ashburn rookie, along with Wyrostek and Andy Hansen from this 1953 Bowman set.
1956 Topps #114 Jim Owens and #274 Frank Baumholtz - I already own these cards in our 1956 Topps set, and I'm selfishly adding second copies of each for my 1950s Phillies binder.
1966 Topps #543 Roger Craig - This card gets me one card away from a complete run of Phillies cards from the 1960s Topps sets.  I'm down to needing just the Gary Sutherland card (shared with the Mets' Don Shaw) from the tough 1967 Topps high-number series.  The only cards standing in the way of my having a complete run of Topps Phillies team sets from 1951 to 2020 are four cards from the 1952 Topps high-number series, two cards from the 1956 Topps set and the Sutherland Rookie Stars card.
1971 Topps #664 Ken Reynolds and #692 Wayne Twitchell - These two cards wrap up my complete run of 1970s Topps Phillies team sets.  Again, Twitchell is with the Brewers here but since he played with the Phillies in 1971, it's worthy of a spot in my team set.
Merry Christmas and a Happy New Year to you and your families!  Stay safe, mask up and go wash your hands.
Posted by Jim at 11:00 AM