Description:  The 1984 Tastykake photo card set got a little more ambitious than its predecessor by adding cards for all the coaches and a broadcaster card.  The fronts are nearly identical to the 1983 set, with the exception of the Phillies script logo added to the top.  The photographer also requested that everyone remove their hats for this set, which was unfortunate for some of the subjects and is reminiscent of the 1976 team-issued photo card set.  The backs of the cards feature a facsimile autograph of the player, coach or manager, and some of the cards include words of encouragement.

I really wish the Phillies had chosen, "Wherever you go, there you are" for the back of Larry Andersen's card. 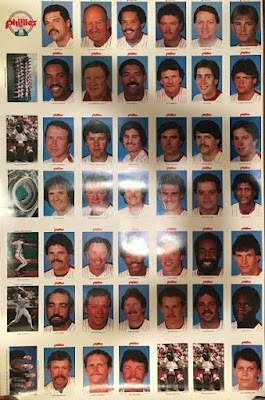 How Distributed:  All fans 14 and under attending the Phillies game at Veterans Stadium on April 21, 1984, received a complete 40-card set, shrink-wrapped and containing a logo/checklist card on the top.  The back of the logo/checklist card advertised that additional sets could be purchased from the Phillies via mail order for $3.
There are also 7 somewhat rare "update" cards available, and by all accounts at least three of these cards were never released to the general public, at least not in very large quantities.  Here's a verbatim report from a reliable hobby source on the origins of these 7 cards:
"That set was a mess from day 1.  We obtained some uncut sheets from the printer right off the bat.  When the team started selling the shrink wrapped sets, we found that the seven players on one side of the sheets were not included.  I called a friend in the PR dept and asked him what was going on.  He was upset that we’d obtained the sheets and explained that they knew that prospects would be called up from the minors during the season and wanted to avoid making special print runs in order to have pictures for them.  So they picked 7 prominent players and filled out the sheet with their pictures.  When I spoke to him, all the cut cards were in stacks in a back store room.  He was concerned that, if word got out as to which 7 they picked, other players would be upset at not having been included.  As the season went on, I believe that they pulled and used the pictures for Carman, Russell, Stone and Wehrmeister but not for Daulton, Fireovid and Jeltz.  In speaking with the PR guy at the end of the season, he asked what I thought he should do with the supplies of the last three.  I told him I’d deep-six them as they hadn’t been “issued”.  They [the Phillies] ended up selling a bunch of the entire run to a dealer up around, I think, Wilkes Barre.  I believe he sold them as separate “extension” sets for a while."
Fellow collector Steve sent me the scan of the uncut sheet shown here, showing the 7 "update" cards in the far right column.  I'm calling these update cards, but they could just as easily be labelled as unreleased rarities.
Complete Standard Checklist (Unnumbered, presented here based  on the numbered checklist found on the back of the header card):

Manager (1):  Owens
Coaches (5):  Bristol, Felske, Johnson, Osteen, Ryan
Phillie Phanatic (1):  Uses the same ATV photo from the 1983 Tastykake set.
Broadcasters (1):  Chris Wheeler, Harry Kalas, Andy Musser and Richie Ashburn.
Commemorative Cards (2):  Carlton and Schmidt get Future Hall of Famer cards.  The back of the Carlton card features a list of all-time victories leaders, while the back of the Schmidt card features a list of all-time home run leaders.
Other Cards (3):  Header/checklist card, team photo and Veterans Stadium.
Surprises:  Knowing what I know now about the genesis of the 7 update cards, the Phillies PR department did a great job of predicting future roster additions.  Only Darren Daulton didn't see playing time with the club in 1984.  The set contains the entire 25-man opening day roster, plus pitcher Tony Ghelfi who started the season on the disabled list and Marty Bystrom who began the season with Triple-A Portland.

Omissions:  Minor leaguers who would ultimately appear with the Phillies in 1984 who could have received consideration for the update set are Francisco Melendez, Mike Lavalliere and Rick Schu.  And for completists, the Phillies added four players from outside their organization throughout the season - Jim Kern, Shane Rawley, Al Oliver and Renie Martin.  Kern and Martin would never receive actual Phillies baseball cards.

Variations/Rarities:  Again, the 7 update cards could easily appear here as they're not technically true update cards and they're not readily available.
Also See:  The Curious Case of Dave Wehrmeister; Memories of 1984 Phillies Photo Day
Resources:  Beckett.com; 14,000 Phillies - Dave Wehrmeister, Worst Phillies Card of All Time; Fellow collectors Steve F., Rick G. and Bill W.
This set was originally featured in a post back in October 2014, and I'm going through these older team-issued set posts to update them with new information learned (if any) over the past six years.
1983 Tastykake Phillies Photo Cards / 1985 Tastykake Phillies Photo Cards
1980-1999 Phillies Team-Issued Photo Cards Want List / Phillies Team Issued Sets Index Page
Posted by Jim at 7:00 AM