Number of Cards:  40
Card Size:  3 1/4" x 5 1/2"
Description:  As was the case with all Phillies photo cards issued throughout the 1970s, these cards feature a black and white photo with the players' name below.  With the exception of the card for coach Brandy Davis, all cards contain a blue facsimile autograph.  The backs of the photo cards are blank and there's no indication on the cards themselves that they're from 1972. 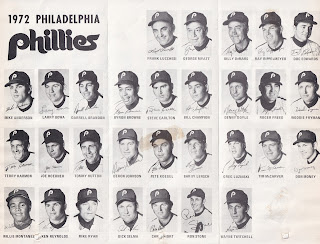 How Distributed:  The photo cards were handed out to fans individually and supplied to the players in order to reply to fan mail or honor autograph requests.  I could be wrong, but I don't believe the cards were ever available in complete set form.  After an original batch of 30, featuring the manager, the coaches and the 25-man opening day roster, an additional 10 cards were released throughout the season, as evidenced by the inclusion of John Bateman, Jim Nash and Gary Neibauer.  The Phillies traded Tim McCarver to the Expos on June 14th for Bateman.  Nash and Neibauer were acquired from the Braves on June 15th for Joe Hoerner and Andre Thornton.
Studying the back of a 1972 Phillies schedule that contains photos of the entire 25-man opening day roster, I've noticed what I believe to be a few discrepancies with the scans presented with the set's entry at the Trading Card Database.  I believe the photos posted online for the cards of Darrell Brandon, coach Doc Edwards and Chris Short are actually from 1971.  The photos the Phillies most likely would have used for these three photo cards are contained on the scan shown here.  I can confirm this for the Brandon card, as I have that in my collection.

Manager (1):  Lucchesi
Coach (5):  Davis, DeMars, Edwards, Myatt, Rippelmeyer
Surprises:  The biggest surprise is the inclusion of top prospect Mike Schmidt, who made his Major League debut on September 12th.  The 10 photo cards added for players (and one coach) not on the opening day roster were (in order of their season debut) - coach Davis, Oscar Gamble, Bateman, Neibauer, Nash, Joe Lis, Bill Robinson, Mac Scarce, Bob Boone and Schmidt.  The future Hall of Fame third baseman appeared within two sets in 1972, the year before his iconic rookie card appeared with the 1973 Topps set - this set and the Puerto Rico Stickers set, both of which are extremely difficult to find.  This set is also notable for containing the first Phillies cards of both Boone and Steve Carlton.
Omissions:  Only 4 of the 38 players to appear with the Phillies in 1972 are not in this set.  Reliever Bill Wilson made his season debut in late July and appeared in 23 games.  The other three players - pitchers Bob Terlecki and Dave Downs along with infielder Craig Robinson - all made their season debuts in August or September.  The only notable omission is the Phillies' second manager during the season, Paul Owens.  Owens, the team's general manager, fired Lucchesi in mid-July and assumed control of a team that would go on to lose 97 games.
Variations/Rarities:  My only source for this set is the checklist found at The Trading Card Database and I'm not aware of any variations or rarities.
Also See:  1972 Topps #PR1 Mike Schmidt (This is a Phillies Room tribute to what Schmidt's 1972 Topps card could have looked like.)
Resources:  The Trading Card Database

I remember that Brandy Davis joined the team during the season as the 1B coach, but I don't recall why.