Number of Cards:  40
Card Size:  3 1/4" x 5 1/2"
Description:  As was the case with all Phillies photo cards issued throughout the 1970s, these cards feature a black and white photo with the players' name below.  Unlike the rest of the Phillies photo cards issued throughout the 1970s, the players' position is also included.  The backs of the cards are blank and there's no indication on the cards themselves that they're from 1970.
How Distributed:  The cards were handed out to fans individually and supplied to the players in order to reply to fan mail or honor autograph requests.  I could be wrong, but I don't believe the cards were ever available in complete set form. 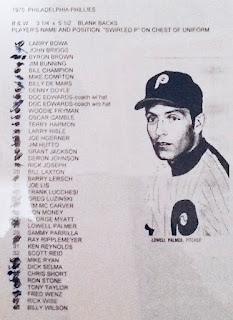 Surprises:  Two versions of the Doc Edwards card is kind of odd.  The Phillies could have issued a third variation with "catcher" listed as Edwards' position as he was activated on June 6th to help carry the catching load after a rash of injuries at the position.  Edwards hadn't caught in the Majors since 1965 but he got into 35 games with the 1970 Phillies, amazingly making 23 starts!
Omissions:  I'm also surprised by the fact the Phillies had 38 players suit up in 1970 and 34 of them are in this set.  The club can't be blamed for omitting the final four, as they were all short-timers that season.  Catcher Del Bates appeared in 22 games between May 6th and June 5th and reliever Mike Jackson pitched in five games between May 10th and May 24th.  The Phillies would have had to scramble to produce and distribute cards of those two players during the short time they were both active.  If I ever get around to producing my Phillies Missing Links custom cards from the 1970s, Bates and Jackson will be the first two cards in the set as neither ever appeared on a Phillies baseball card.
The other two players omitted were two prospects who would both go on to have much more time in Phillies uniforms.  Outfielder Willie Montanez and infielder John Vukovich were both September call-ups and cards weren't produced for them.
Variations/Rarities:  There are two versions of the Edwards card - one featuring him with a hat, and another featuring him without a hat.  I'm not sure which is more prevalent than the other, so I've listed them both above as part of the main checklist.

Resources:  As far as I can tell, there's no other record or checklist of this set available online.  Phillies collector Rick (@rickphils) was kind enough to send along the scan shown above, which is what I used for my checklist.

It's a rare sighting indeed!