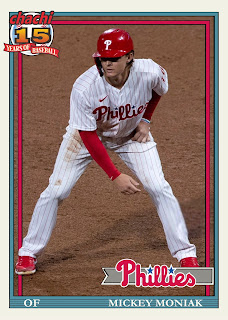 34 - Moniak baseball cards in my collection per The Phillies Room Checklist as of 9/17/20.

The Phillies #1 draft pick from 2016, and the draft's overall top pick that year, Mickey Moniak was recalled on Wednesday afternoon to take the place of the injured Kyle Garlick on the active roster. Wearing #16, Moniak made his Major League debut as a pinch-runner for Alec Bohm in the ninth inning of a game the Phillies would eventually lose to the Mets.

Not surprisingly, and since he's been one of the team's top prospects for 4 1/2 years, I have quite a few Moniak baseball cards already in my collection. He's been a regular in the Bowman releases since 2016 and he's also featured in a number of Phillies minor league team sets since then too.