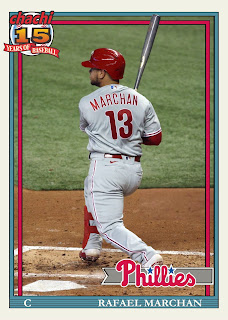 4 - Marchan baseball cards in my collection per The Phillies Room Checklist as of 9/15/20.

Rafael Marchan's meteoric rise through the Phillies system saw him playing with the Low-A BlueClaws last summer, appearing with the Phillies in spring training, getting added to their Player Pool in July and then making his big league debut on September 14th.  He switched his uniform number from 85 to 13 for the occassion.

I have four Marchan baseball cards in my collection so far, all from recent minor league team sets.
2020 Virtual Phillies Wall / 2020 Season Summary Index / 2020 Chachi Set Checklist
Posted by Jim at 7:00 AM