What It Means:  Spoiler alert for the second game, but as pointed out in this Doug Kern Tweet, this was to be the first double header in which the Phillies offense was held to four hits or less in both games since August 13, 1968 against the Astros.  Making it somewhat worse, the Braves went with a full bullpen game and six different relievers stifled the Phillies offense.

What Happened:  Phillies starter Vince Velasquez went four innings (76 pitches) and allowed a run on three hits while striking out six.  The bullpen duo of Deolis Guerra and Morgan combined for 2/3 of an inning, with four runs on four hits, including the two-run home run allowed by Guerra to Ronald Acuna, Jr.  The lifeless Phillies line-up had a pair of singles and a double.  Both Phillies runs came courtesy of productive outs from Andrew McCutchen - a ground out in the third and a sacrifice fly in the fifth.

Featured Card:  This was supposed to be Alumni Weekend, with second baseman Manny Trillo getting inducted into the Phillies Wall of Fame.  Instead, Trillo's ceremony will be postponed and the entire 1980 team was present in the ballpark only in the form of cutouts in the right field seats.  (Photo below from Tyler Kepner's Twitter feed.)

Transaction:  Kyle Garlick (of) was added as the 29th man for this double header. 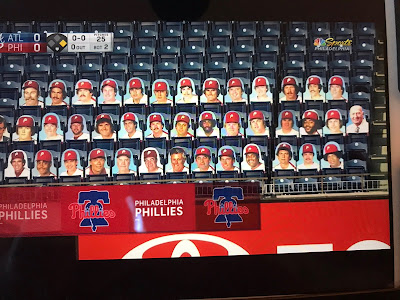 Email ThisBlogThis!Share to TwitterShare to FacebookShare to Pinterest
Labels: 1980, Trillo