What It Means:  Just when you thought it couldn't get any worse . . .

In his postgame comments, manager Joe Girardi admitted he was frustrated and "That's a game that I thought, in a lot of ways, we gave it away."

What Happened:  A game summary here is best conveyed with a look at each separate instance of happiness, disappointment, confusion and pain from the sixth inning onward.


Featured Card:  Segura should have been the hero here due to his tie-breaking eighth inning home run, but the ball dropping in between him and Hoskins in the ninth to allow the Orioles to take the lead could end up being one of the most memorable moments of the season. 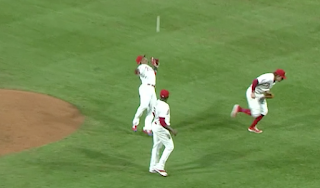 Transactions:  The two pitchers who had a hand in Monday night's bullpen meltdown were replaced with two new relievers.  Nick Pivetta (rhp) was optioned to Lehigh Valley and Trevor Kelley (rhp) was designated for assignment.  Blake Parker (rhp) and Connor Brogdon (rhp) had their contracts selected and Nick Williams (of) was designated for assignment as a 40-man roster spot was needed.  Kelley and Williams could pass through waivers and return to Lehigh Valley in a few days.

Email ThisBlogThis!Share to TwitterShare to FacebookShare to Pinterest
Labels: 1971, 2020, Segura