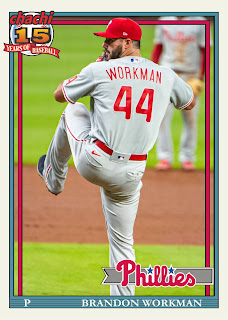 0 - Workman baseball cards in my collection per The Phillies Room Checklist as of 8/23/20.

It's a complete coincidence that Brandon Workman's uniform number and his number in this year's Chachi set are the same.

When the Phillies acquired Workman on Friday night, I reviewed his recent baseball card appearances and added his following 2020 base cards to my want list:  2020 Topps (series two), 2020 Topps Heritage and 2020 Topps Total.

Workman should hopefully help the awful Phillies bullpen, but in his Phillies debut on Saturday night he allowed a two-run double to Matt Adams, on the very first pitch he threw, allowing the Braves to take a 5-4 lead. He led the Red Sox in saves last season with 16 and was one of the best relievers in the entire American League.

Workman was originally drafted by the Phillies in 2007 in the 3rd round of the amateur player draft, but he didn't sign with the club opting to go to the University of Texas at Austin.  The picks made by the Phillies before Workman in that draft were Joe Savery (1st), Travis d'Arnaud (supplemental) and Travis Mattair (2nd).
2020 Virtual Phillies Wall / 2020 Season Summary Index / 2020 Chachi Set Checklist
Posted by Jim at 12:00 PM