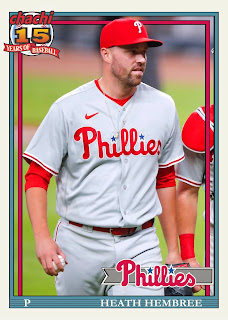 0 - Hembree baseball cards in my collection per The Phillies Room Checklist as of 8/24/20.

No matter how many times I encounter this, it's still mind-boggling to me how a relief pitcher like Heath Hembree, owner of 250 career appearances dating back to 2013, has one and only one Topps flagship set appearance to his name.  How is he so consistently overlooked?  Hembree appeared in 62 and 67 games respectively for the 2017 and 2018 Red Sox.

He was graced with a Topps Total card this year, so I'll need to track that down for my 2020 Phillies binder.

Hembree also is that rare player to assumes the uniform number of the guy he was traded for.  Nick Pivetta, now pitching at the Red Sox' alternate training site, wore #43 during his four-year stint with the Phillies.
2020 Virtual Phillies Wall / 2020 Season Summary Index / 2020 Chachi Set Checklist
Posted by Jim at 7:00 AM