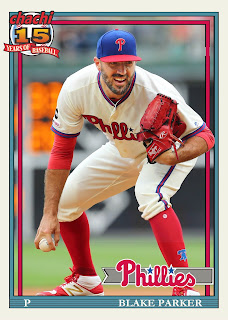 4 - Parker baseball cards in my collection per The Phillies Room Checklist as of 8/12/20.

Blake Parker came to the Phillies in July of last season as part of the wave of relievers the team picked up in the second half to try to bolster the beleaguered bullpen.  He came back to the club on a minor league deal signed in February.

He surprisingly appeared in the 2020 Topps Series One checklist, despite having pitched only 23 games for the Phillies last season.

I botched his custom photo card, assigning Parker #54 on the card, a number he's never worn for the Phillies or any other team.