On Thursday afternoon, the Phillies released their 2020 Opening Day roster on their social media accounts, and most people were quick to point out the roster had only 29 names listed.  Phil Gosselin has also apparently made the team, and rightfully so, but another roster move is needed first in order to clear space for him.  There's a lot to digest here, and for the final time in 2020 here's the updated Camp Head Count.  (Until Gosselin is added, but you get the gist.)

And finally, I noticed on the Phillies roster page on their website a few players who made the club have opted for lower uniform numbers.  Kyle Garlick (of) switched from #72 to #23, and Reggie McClain (rhp) switched from #60 to #39. 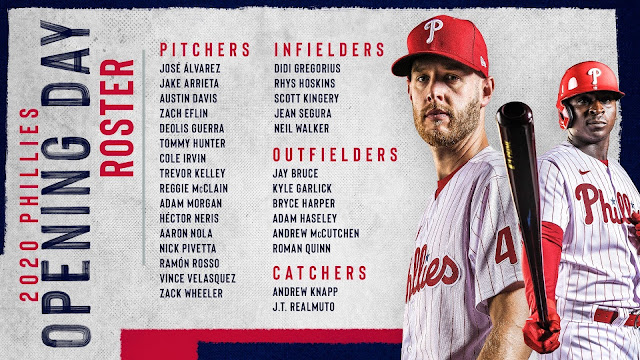 That's 4 Topps rookie cup hitters (Walker, Cutch, Bruce, Bryce) and one who should of been Hoskins.

All thise extra players and still only 2 catchers?