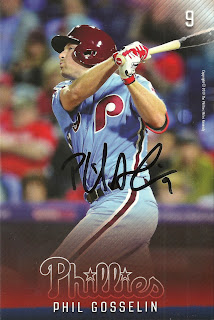 Phillies 7, Marlins 1
Game 2 - Saturday Afternoon, July 25th in Philadelphia
Record - 1-1, Tied for 1st Place with every team in the division

One Sentence Summary:  Phil Gosselin continued to swing a hot bat and Zack Wheeler looked fantastic in his Phillies debut as the team downed the Marlins, 7-1.

What It Means:  Easy wins are way more fun than hard wins, and this was an easy win.  The score was tied at 1-1 entering the sixth but it felt as the Phillies were in control the entire time.

What Happened:  Wheeler pitched seven innings, allowing a run on five hits while striking out four. Tommy Hunter and Deolis Guerra pitched the two scoreless innings of relief.  Didi Gregorius got the Phillies on the board with his second home run in as many days in the second inning.  Gosselin hit his first home run in the sixth, giving the Phillies a 3-1 lead and J.T. Realmuto padded that lead with a three-run home run in the seventh.  It's notable that Rhys Hoskins had walked and Bryce Harper had laid down a perfect bunt along the third base line where the Marlins' defensive shift had left third base undefended.  Realmuto then hit his blast with both on base.  Gosselin added a second home run in the eighth for good measure.

Couple of cool notes from this game - Gregorius became the first shortstop in Phillies team history to homer in each of the team's first two games of the season (Meghan Montemurro Tweet) and Gosselin joins Ricky Ledee (June 11, 2004) as the only Phillies DH with two home runs in a game (Matt Gelb Tweet).

Email ThisBlogThis!Share to TwitterShare to FacebookShare to Pinterest
Labels: 2019, Gosselin