One Sentence Summary:  The top of the Phillies line-up went 1 for 14 and the new look bullpen struggled in its debut as the Phillies lost the 2020 season opener to the Marlins, 5-2.

What It Means:  The word unprecedented has been overused the past four-plus months, but it's still the best way to describe this Phillies' home opener.  The stands were empty and attendance was zero due to the COVID-19 pandemic.  Prior to the start of the game, the Phillies and Marlins participated in a moment of unity with everyone holding a long black ribbon while lined up along the first and third base foul lines.  Black Lives Matter was stenciled in the dirt behind the pitcher's mound and players wore BLM or United for Change patches on their jerseys.  For me personally, it's refreshing to see Major League Baseball openly addressing these issues instead of ignoring them.  Hopefully, we can keep this momentum going.

McCutchen wrote a statement narrated by actor Morgan Freeman that played in Citizens Bank Park and several other parks throughout the day. 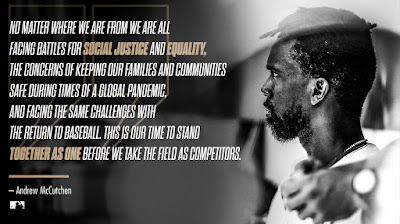 For the game, crowd noise was played over the public address speakers, ballplayers stayed socially
distant in the dugouts and the Phillie Phanatic entertained several empty sections of seats.

What Happened:  Aaron Nola made his third straight opening day start, and he looked pretty good through five innings.  The Marlins scored four in the sixth, chasing Nola and rattling reliever Ramon Rosso in his big league debut.  Rosso allowed an inherited runner to score, plus one run of his own, while uncorking two wild pitches.  Nola's final line was 5 1/3 innings with 4 runs on 5 hits while striking out 7.  Reggie McClain, Austin Davis and Trevor Kelley kept the Marlins off the board over the final three innings.

Didi Gregorius briefly tied the game with his first Phillies home run in the fifth, but the Phillies offense couldn't solve Marlins starter Sandy Alcantara.  In total, the offense had five hits, including a pair from Gregorius. 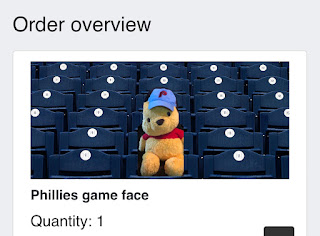 Featured Card:  To date, Gregorius has appeared on two Phillies baseball cards featuring him in an actual Phillies uniform - this Topps Now Road to Opening Day card and a Topps Total card.

Transaction:  As expected, Phil Gosselin (inf) had his contract selected prior to the game and Arquimedes Gamboa (inf) was designated for assignment to make room for Gosselin on the 40-man roster.

In other news, I've successfully ordered a cutout of our son Ben's stuffed friend to hopefully be included among the "fans" viewing games this season at the ballpark.  We'll be scanning the future television broadcasts in the hope of seeing him cheering the Phils.