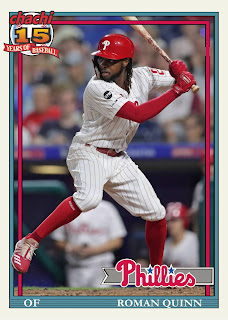 68 - Quinn baseball cards in my collection per The Phillies Room Checklist as of 7/28/20.

The oft-injured Quinn hopes to stay healthy throughout this shortened 2020 season.  He was on the injured list three times in 2019 and he missed most of 2017 with a left arm injury.  He's always been a favorite in our household, and we're pulling for him at The Phillies Room HQ.

I'm a little surprised at the number of Quinn's baseball cards in my collection, but then again he's been appearing on prospect and minor league cards since 2012.
2020 Virtual Phillies Wall / 2020 Season Summary Index / 2020 Chachi Set Checklist
Posted by Jim at 7:00 PM