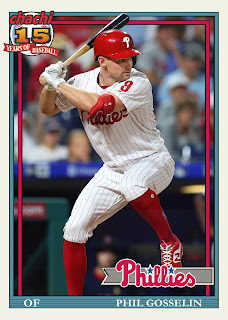 1 - Gosselin baseball card in my collection per The Phillies Room Checklist as of 7/28/20.

Gosselin, known affectionately by his teammates as "Goose" or "Barrels," has had only a few mainstream baseball card appearances despite playing parts of eight seasons in the majors.  He's had just one Phillies card to date, in the team's second series of team-issued photo cards last season.

Other than his 2015 Topps flagship appearance, Gosselin also has cards in 2011 Topps Pro Debut, 2016 Topps Heritage and 2017 Topps Heritage.

Gosselin returned to the Phillies in 2020 after being outrighted off their 40-man roster on November 4th.  He re-signed with the team on December 20th and was the first of the many non-roster invitees invited to 2020 spring training.  Originally a long-shot to make the team, his extremely hot bat during spring training and Summer Camp won his roster spot and led the team to release Josh Harrison.