This a crossover post from my other blog, chronicling each card in the wonderful 1956 Topps set. Today's post features former Phillies outfielder Roy Sievers.  Please click on over there for all of the posts to date, including a look at all the Phillies Alumni featured in the set.

A prolific American League slugger, usually overshadowed by the likes of Mickey Mantle (#135) and Ted Williams (#5), Roy Sievers was the Rookie of the Year in 1949 and a four-time All-Star.  Over his 17-year big league career, he slugged 318 home runs and tallied 1,147 RBIs with a lifetime .267 batting average.  Playing for the basement dwelling Senators, his offensive feats weren't as publicized as those of his counterparts in New York and Boston, but Topps did see fit to give him a Baseball Thrills card in its 1959 set to highlight his accomplishments.

Limited by shoulder injuries early in his career, Sievers blossomed once traded by the Browns to the Senators in February 1954.  He hit at least 20 home runs in every season between 1954 and 1962, driving in at least 100 runs in four of those seasons.  His best season came in 1957 when he hit career highs in home runs (42) and RBIs (114) leading the league in both categories.  He finished third in MVP voting that season behind Mantle and Williams.

Along with Gil Hodges (#145), he's one of two early members of the 300 home run club not in the Hall of Fame.  Sievers also holds the distinction of playing for both Washington expansion teams, finding the most success with the franchise that would ultimately become the Twins in 1961 and then finishing his career with the franchise that would move to Texas and become the Rangers in 1972.

Building the Set
July 31, 1993 in Ocean City, NJ - Card #118
This is one of five 1956 Topps cards I purchased at the Ocean City baseball card show during the summer of '93.  My notes indicate we paid $6 for the card, and it's in absolutely pristine shape.

I already wrote about the summer of '93 with the Frank House (#32) post back in February, but it's worth repeating here.  After missing much of my freshman spring semester with a bad case of mono, I spent the summer mostly resting at home and taking make-up classes at nearby Rowan College of New Jersey (now Rowan University).  Looking back now, it's strange to me that I have so few memories or pictures from that summer.  I found pictures I took from an Orioles-Twins game at Camden Yards with shots of Fernando Valenzuela pitching to Dave Winfield and Kirby Puckett, and another picture of Cal Ripken at bat.  There were also pictures of my Nana's house in Sea Isle, which I think I spent part of that summer painting (again).  But that's it.

I know it was just another summer day at the time, but I'd love to have one picture of my Dad and me as we were about to attend this baseball card show that Saturday afternoon in Ocean City.

The Card
The head shot used for Sievers is the same from his 1954 and 1955 Topps cards.  The action shot appears to show Sievers wearing his road Senators uniform, and sunglasses, pulling back a ball from either foul territory in left field or possibly saving a home run.  The Senators' road uniforms featured no pinstripes and the blue block W in 1954 and 1955, with their home uniforms featuring pinstripes.

Although he won Rookie of the Year honors with the Browns in 1949, his next four seasons with the club were marked with disappointment and lengthy slumps.  Sievers suffered a dislocated shoulder injury on August 1, 1951 while playing for the San Antonio Missions, a Browns' farm team.  He'd spend the next few seasons trying to overcome that injury before the Browns finally traded him to the Senators prior to the 1954 season for Gil Coan.

1956 Season
As the regular left fielder for the Senators, Sievers appeared in 152 games (missing only two of his team's 154 games) and hit .253 with a team leading 29 home runs.  He had 95 RBIs, which was one less than the 96 accumulated by right fielder Jim Lemon.  At the time, Sievers and Lemon formed one of the most feared home run hitting duos on any team along with Mantle and Yogi Berra (#110) from the Yankees.  Sievers appeared in his first of five All-Star Games in 1956, playing in both 1959 games.  In his sole plate appearance in the 1956 game, Sievers pinch-hit for pitcher Early Wynn (#187) in ninth, popping out against pitcher Johnny Antonelli (#138). 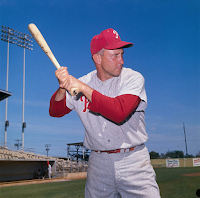 Phillies Career
On November 28, 1961, the White Sox traded Sievers to the Phillies for John Buzhardt and Charley Smith.  Having moved to first base for good in 1959 due to lingering shoulder issues, the Phillies picked up Sievers to take over that position from fading prospect Pancho Herrera.

Sievers provided a veteran presence in an otherwise young clubhouse, as the 35-year-old Sievers was the only regular on the 1962 Phillies club older than 27.  Along with Don Demeter, Tony Gonzalez and Johnny Callison, that 1962 team boasted the first quartet of players in franchise history to each hit at least 20 home runs.

Sievers' production fell in 1963 due a fractured rib suffered in spring training when he was hit by a Jim Maloney fastball.  He hit only 19 home runs that season, with his biggest blast being his 300th career home run on June 19th.  That home run, off Mets' reliever Roger Craig (#63), was a walk-off two-run shot to give the Phillies a 2-1 victory.  Struggling at the start of the 1964 season, Sievers was sold to the expansion Senators (the second version) where he was used primarily as a pinch-hitter for the remainder of the season.

115 - Sievers non-parallel baseball cards in the Beckett online database as of 11/6/19.