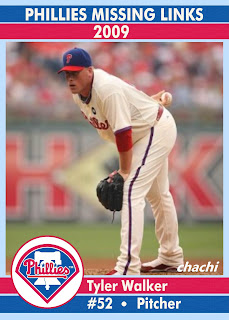 Following their World Series victory in 2008, the Phillies were trying to make it back to the postseason for the third year in a row in 2009.  In mid-June, the Phillies had a modest lead in the division over the Mets, but they had recently placed both Brad Lidge and Scott Eyre on the disabled list and they were searching for some stability in their bullpen.  Sergio Escalona had already been recalled and optioned twice over the first few months of the season and when he was optioned for the third time on June 14th, Tyler Walker was recalled.  Walker had gone to spring training with the Mariners but had been released on March 29th.  Ten days later on April 9th, the Phillies signed him and sent him to the IronPigs until his services were needed in mid-June.

Walker proved to be a somewhat reliable reliever for the Phillies in the second half of 2009, and he was used on several occasions for two-inning stints.  He'd appear in 32 games for the Phillies, making his inclusion on this Missing Links list somewhat surprising.  In 35 1/3 innings, Walker had an impressive ERA of 3.06 and a 2-1 record.  In fact, his ERA had been under 3 for most of his time with the club until two late season appearances in which he didn't retire a batter but allowed four runs.  Walker didn't appear in any postseason games for the Phillies and he was released on November 10th.

I was pleasantly surprised to see him in attendance this past August at the 10-year reunion of the 2009 N.L. pennant winning team.

Phillies Career
32 games, 2-1, 3.06 ERA over 35 1/3 innings
Acquired:  April 9, 2009 - Signed as a minor league free agent formerly with the Seattle Mariners organization.
Debut:  June 16, 2009 - Relieved Clay Condrey in the 10th inning of a game the Blue Jays would go on to win, 8-3.  Condrey departed having allowed a pair of runs and with the bases still loaded.  Walker allowed all inherited runners to score before inducing a groundout to end the inning.
Final Game:  October 3, 2009 - Pitched two scoreless innings after relieving Cole Hamels in the fourth.
Departed:  November 10, 2009 - Granted free agency and signed as a free agent by the Washington Nationals, January 25, 2010.

0 Walker Baseball Cards in My Collection