What It Means:  This latest loss put the Phillies on the brink of play-off elimination with their magic number to elimination down to one.

What Happened:  Eflin has been inconsistent all season, and in this outing he gave up eight hits and four walks while allowing five runs.  The Phillies didn't have a chance against Corbin, and the offense went 0 for 9 on the night with runners in scoring position.

Featured Card:  Short-term Phillie Asdrubal Cabrera was signed by the Nationals in early August after being released by the Rangers.  He's currently hitting .305 with five home runs in 35 games so far with the Nationals, and he'll head into the postseason with the team.

Field Report:  I attended the Diamondbacks-Cardinals game on Monday night, and it was refreshing to take a break from the Phillies.  In the photo below, you can see the out of town scoreboard in the upper left-hand corner, showing the Phillies on their way to another loss. 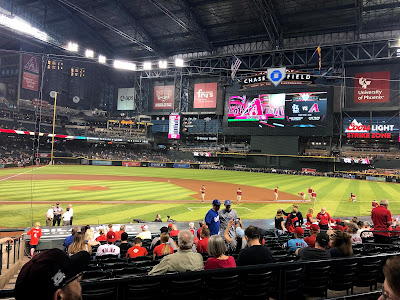 Email ThisBlogThis!Share to TwitterShare to FacebookShare to Pinterest
Labels: 2018, Cabrera