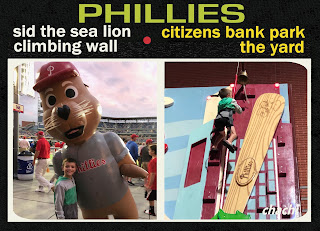 One Sentence Summary:  The Phillies enjoyed a 17-hit barrage in this 12-3 win over the Pirates.

What It Means:  The win meant a series win, followed by a Thursday off day.  Coming up next, the fourth place Mets come to town for a weekend series.

What Happened:  Every hitter in the starting eight had multiple hits, with the exception of Corey Dickerson who at least hit a fifth inning solo home run (9).  J.T. Realmuto also homered (20) and had three hits.  Cesar Hernandez, coming off his benching for not hustling in Sunday's game, also had three hits.  Rhys Hoskins showed life at the plate with a double and a triple.

Vince Velasquez was the beneficiary of the offense, earning the win after pitching five innings and allowing only two runs.

Featured Card/Field Report:  My work schedule kept me away from this game, but Jenna soldiered on and took both our sons.  Trying something new, they enjoyed dinner at Pass and Stow and then spent quite a bit of time at The Yard.  Ben even achieved his goal of reaching the top of the Phanatic climbing wall.  Finally, they enjoyed the game from the right field bleacher seats, the first time anyone in our family has viewed the game from that vantage point.
Posted by Jim at 7:00 AM